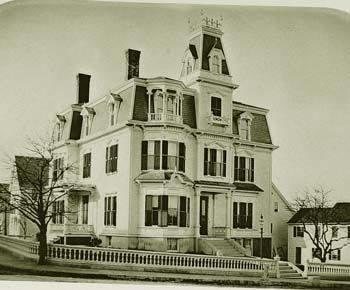 This mansion was once owned by Sylvester Knowlton Pierce, the wealthy founder of the SK Pierce & Son Chair Company. It dates back to 1875 and was originally located at 21 Union Street, but was moved to where it now stands shortly thereafter. The home has had several famous guests including P.T. Barnum, Norman Rockwell, Bette Davis and President Calvin Coolidge. There are several spirits that are believed to linger here, including that of S.K. Pierce's first wife Susan, who died of an illness just 3 weeks after moving into the home. Mattie Cornwall, a nanny who loved the mansion is also said to haunt the place, along with S.K. Pierce himself, and some of his family members as well. The home was later turned into a brothel and a ghostly prositute who had been murdered here was added to the list of spirits that reside at the location. Another eerie occurrence: a boarder named Eino Saari is believed to have died here in 1963 of spontaneous combustion.